You are here: Home / Houseboat Adventures Celebrates 40 years in 2021!
PreviousNext
123

Back in the early 1980’s Jeff and Lorelie floated around an idea of building a houseboat after Jeff’s Dad told him about some cool-looking ” houseboats” he saw on a visit to Arizona.

Great idea – they envisioned summers on a Lake, lots of time for water-skiing, you know living the life!

In the Fall of 1981, with the houseboat plans still an inkling, Jeff and Lorelie thought they first should locate a lake to moor the boat and arrange for someone to rent the houseboat out until they were ready to relocate and manage it themselves.

They decided to travel across part of the country to locate a suitable lake. They travelled from the Toronto area to Montreal stopping to understand what region might attract a houseboat company. The Thousand Island area at Gananoque, Ontario is right between Montreal and Toronto and a very high traffic area with beautiful country, so it certainly was a contender. Coming from the west they were also familiar with BC and all it had to offer. Being skiers, they had spent time at many of the ski resorts in Alberta and interior British Columbia.

They came upon the Kootenay Lakes and Balfour Beach, BC, near Nelson and decided it was a great place to begin.

And so, Houseboat Adventures was created!

Check out photos of Jeff and I then and now, below.

Jeff hired and then supervised the building of a 38-foot houseboat out of Vernon BC which became little “Bravo”. They needed to work out how they could attract renters for this houseboat, since they did not wish to rely on the marina at Balfour Beach to book the boat. They wanted to get the word out too!

Bravo was completed in the spring of 1982.

They still have their first brochure, price list and rental application from 1982. Back then, all bookings were made by a mail-in-form with a cheque enclosed for the deposit. They needed an address and since they were unable to get a PO box near Balfour, they arranged for a PO box out of Blairmore AB and had the mail forwarded to their home in Saskatchewan. Convoluted, for sure.

They continued working their day jobs; Lorelie in banking and Jeff is, by trade, a Millwright, and an aircraft mechanic. After one season, they decided that maybe the Kootenay Lakes was not the best place for them, so, they began another search.

A friend mentioned that his brother lived on the south end of a large lake in Ontario. This was the first time they had heard about Lake of the Woods!

In the fall of 1982 Jeff visited the perfect location – Kenora Ontario. They were not quite yet committed to relocate but Jeff did meet a nice guy who was a school principal and enjoyed the summers off. It was the ideal arrangement he to have someone manage the rental of their houseboat for the next season. Easy – they just had to build another houseboat.

Jeff wanted to design this next houseboat and hire a builder near Kenora for construction. Bravo, in the meantime would remain in BC another season.

In the early Spring of 1983 their 2nd houseboat, a 52 foot was being built under Jeff’s supervision in Winkler MB. They launched “Charlie C” on Lake of the Woods that May and they have the photos for this momentous occasion!

Knowing only two people in Kenora, a real estate agent named Dave who helped find a location for the operation and the school principal Bob, who rented out our new houseboat, they decided to relocate full time to Kenora for the 1984 season. Lorelie arranged a transfer with her employer and the move was put into place for Jan 1984. Jeff would join her 2 months later.

And as they say, the rest is history.

They began to expand their reach to attract guests, and for several years to come they attended many sport shows both in Canada and USA. Sport shows back then were sometimes a 10-day event (Chicago) and lasted for a 12-hour day, and yet some were only 3-day weekend shows. Jeff was mainly the one to travel to the shows and got to know many of the other tourism operators in the area, as their booths were located at the same spot at the same show year after year. In fact, in 1987 Lorelie got to know 2 girls from Tennessee who were in the next booth. One of them wanted to attend a new daytime TV show that was filmed in Chicago. So, one of the gals and Lorelie rode the subway downtown early the next morning. They saw backstage and what goes on behind the scenes. They were positioned in the audience to be on camera during the taping and Lorelie briefly met the up-and-coming host backstage – yes, it was Oprah!

In the Spring of 1985 Jeff designed and built another houseboat, a 46-foot model “TAMI II” and Spring 1986 he built 3 more 46-footers, “Venture III”, “WREN I” and “Lora-Lee II”. The spelling could not be the same as “Lorelie” since that name was already registered for a ship. It was one busy winter and spring for them.

Over the years Jeff remodelled houseboats, they sold a couple, and they also purchased 3 houseboats. A major renovation to a 46-foot houseboat a few years ago, wherein Jeff sliced it both down the middle and front to back, creating their 58′ houseboat the “Lora-Lee II”. Jeff has become an expert, he knows the boats inside and out, both mechanics and construction.

Finally, with his vast knowledge in the field, Jeff designed and built the perfect rental houseboat. Their largest and very popular 68-foot model is complete with a helicopter landing pad on the top. It is still the favourite for many guests, and it is always the first to book up, sometimes up to 20 months in advance!

They bought property in the 80’s and built the home in which they still reside. Lorelie continued to work at the dock evenings and weekends since she still had her other full time job. Their 3 sons were born and raised in Kenora with all she has to offer. And a bonus, they always had a guaranteed summer job, even before they might have wanted to begin working! From an early age they would boat into work, cooler in hand with their snacks and lunch. They worked Saturdays, then full-time work in the summer months cleaning fishing boats, swabbing decks, working in the shop, and when older, with guest services and instructing guests on orientation and navigation. When a houseboat was available, they sure enjoyed the perks of a last-minute family trip, and when older, taking a houseboat out for the weekend with their friends.

They have welcomed memorable guests over the years. Some have become great friends and yes, they still come for their annual adventure. Guests who were caught in the absolute worst storm with Jeff sleeping on the floor by the VHF radio (this is before cell phones) just in case, another group becoming totally lost and Jeff having to find them by plane, guests who made up a song for us to Roger Miller’s King of the Road (help find them by sharing the video) and pulling a few houseboats off reefs, to name a few. They have so many stories……for another post.

Their business has not been without its ups and downs. Managing a workshop and houseboat storage area in the off-season and maintaining a dock location to operate has given them challenges throughout the years. As anyone who operates a small business knows, you can be chief deck washer, marketing manager, accountant, and, all at the same time. And then a pandemic hit. We are all working our way through that!

Jeff and Lorelie, along with their dedicated staff operate 7 houseboats from Main Street dock in downtown Kenora. For nearly 3 decades their guests have enjoyed meeting and dealing with Brian, their friendly dock manager who is integral to their operation. They have employed many students over the decades too, some they still keep in contact with.

Guests have come from all over North America, and for so many great reasons; special birthdays and anniversaries, family vacations, friend trips, girl and guy trips, fishing, hunting, family reunions, bachelor and bachelorettes, moms get-away, father, son uncle and cousin trips, seniors couple trips, and celebrations of life, to name just a few.

Jeff and Lorelie are thankful to their many wonderful guests who have enjoyed their houseboats over 4 decades, some returning year after year for more than 25 adventures. They love to hear guests say their trip was “the best vacation ever!”

What a great way to earn a living, to be able to provide the ultimate Houseboat Adventure experience and to make people happy. They are truly blessed for all the years they have been able to live and work at a business they began with just an idea, and to call Kenora and Lake of the Woods home. 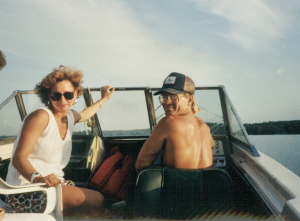 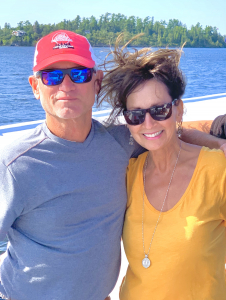